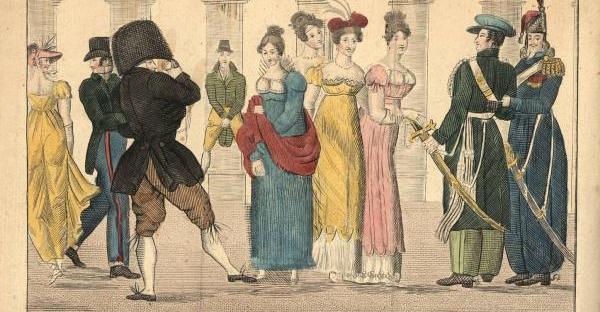 This painting, depicting a scene not so different from one we could find today in the same location, has a cheeky hidden context.

Clutch your pearls and grab your smelling salts respectable folks!

A reproduction of the lost original and first shown in salons in the early 19th century, artist Louis Léopold Boilly barely escaped the Reign of Terror thanks to his habit of pushing the boundaries of propriety with his “morbidly obscene” yet realistic style of painting. He continued to scandalize the slightly less rigid standards of a post-Revolutionary Paris with this scene of a seemingly normal moment in the day to day Bourgoise life of Parisian men, women, and children at the Palais Royal.

However, on further inspection there are a few clues that show this is anything but an appropriate family afternoon outing.

To start, we got a few ladies of leisure, who can be identified by their scandalously bare arms, naked ankles, and flimsy dresses. Accompanying them are upper middle class men whose reputations are high enough to afford a little afternoon delight without risking their honor or position.

On the far left, there seems to be a minor dispute. Monsieur clutches the railing, perhaps he feels the price tag of this ménage à trois is too high. Beside them we see the round rump of a girl lifting her skirts, probably giving potential buyers a taste of the goods before they commit to buy. The woman above her seems to say “for fecks sake Constance, you are giving it all away! I can see the outline of your knee through those five layers of petticoats!”

To the right, a satisfied customer grasps the waist of a visibly annoyed lady, who is probably thinking “Hell no we will not be Facebook friends. Pay up and back off, I got things to do.”

Moving along, a women is batting her eyes at potential customers, maybe trying to sweeten the deal. “You want me to put that cane up your bum? Ok but there’s a 15% added charge for sodomy”. A child looks up beside her, is it a decoy to make this scene more PG?

On the far right we have a Mademoiselle stroking a dog in a basket, held by a man who appears to be translating for his turbaned master who stands behind them looking on. The woman between them is the Pimp; her arms around them both while negotiating the price.

The garden and galleries of the Palais Royal were well known for their more libertine activities, and this was a popular hotspot for working ladies of all classes who came here to “faire leur palais”. This was even where pre-Emperor Napoleon picked up a lady who he lost his V-card with! (see related post below!)

As many as 600-800 women lived and worked at the Palais Royal until Louis-Philippe forbid prostitution there in 1830.

Where Napoleon Popped His Cherry

*if you haven’t read part one, I insist you stop here and go back to the previous post.. For everyone else, fix yourself an Old Fashion because this is a long one.. . .

One of the big reasons I created this page was to bring attention to the endless number of significant historical landmarks that can easily be found around Paris for anyone to see. If you know where to look …

Many of these are marked with plaques that explain the significance of the site: however many more are not marked at all, or they aren’t easily accessible. These are the ones that fascinate me. After 8 years in Paris and many hours spent browsing dusty books in libraries or late nights online, anything labeled “Paris Secret/Unknown/Mysterious” catches my eye. But rarely am I surprised now adays. Until I came across an online article that caught my attention. It was titled “Mosaïque de Jeanne d’Arc blessée au 15 rue de Richelieu” (Mosaïque of Joan of Arc hurt at 15 rue de Richeleau). This article claimed that at precisely this address in the 1st arrondissement of Paris, Joan was severely injured during the battle of Paris on Thursday the 8th of September 1429.

Let me explain.. After Joan did Charles VII a huge solid by crowning him at Reims (this was significant because there was some controversy over his lineage and his right to ascend the throne. His own mother threw him under the bus and claimed he was a bastard and not the legitimate son of his crazy father King Charles VI. Ouch) Joan had her sights set on liberating Paris, which had been controlled by the English for nearly 9 years.

Unfortunately for her, King Charles (thanks to JOA) found his support for Joan weakening. Having gotten his crown and newfound support of the French people (again thanks to JOA for leading all those successful battles!) he just wasn’t motivated to hurry himself along and regain Paris under French rule. So he half-heartedly allowed Joan to take an army into Paris to see what she could do. Things were looking good as she conquered Saint Denis north of Paris and then marched her soldiers towards the western side of Paris at the Porte Saint Honoré (there was the defensive wall of Charles V circling Paris at this time, and these portes/entrance ways were heavily defended. To even have a chance at conquering Paris, Joan and her army needed to infiltrate this entryway), which was protected by a badass moat and ditches. There was even a pig market nearby, but more on that later.

The battle began poorly; the soldiers just couldn’t manage to get over the GOD DAMN WALL into Paris. They fought fiercely from dawn to dusk when suddenly Joan took a god damn arrow (from a fricken crossbow!) to the thigh. It brought her down but it wasn’t enough to make her give up and call it a day. She screamed for her men to continue, to get over the wall, to continue their assault- but she was forcibly carried from the field as her weary men retreated.

In short, Joan of Arc never actually entered Paris. And you know the rest.. Today in Paris, you can still see testimonials of the 8th of September 1429. At Place des Pyramids, just a few steps from the Louvre at 161 rue Saint Honoré, you can see the face of Joan looking down at you from above.

The inscription below her reads “Here was the Porte Saint Honoré, near to which Joan of Arc was injured in 1429”. There is another larger, grander, golden statue of Joan mounted on a horse nearby between the Louvre and the Jardin des Tuilleries.

But these two markers do not show the EXACT place where Joan was injured. And that is what I was curious to see. Because according to this website, in May of 1987, students from the nearby school Jean Baptiste Poquelin and the mayor of the 1st arrondissement, inaugurated a beautiful Mosaic depicting Joan during her attempt to take Paris near the now long gone Porte Saint Honoré. This was created by the students of the school with the help of their principal and arts teacher.

Numerous historians confirmed that this was the actual exact place where Joan was injured based upon eye witness testimony that has been recorded and kept throughout the past 600 years. A significant point between several testimonials was that Joan was injured not at the porte Saint Honoré itself, but rather 100 meters or so off to the side between the pig market and a trench that was at the base of the fortified wall. Check out the pictures of the maps I have for comparison.

So off I went to go find this historically significant mosaic, which was situated in the courtyard of an apartment building according to the article. Which brought me my first challenge. GETTING IN! (You need a code to access most Paris buildings that is entered on a keypad next to the door) I waited at the door on the street for about 20 long minutes for someone to either leave or enter with the door code- so that I could get access. Finally the door opened, and I walked in, feeling exhilarated to see this mosaic, this historic moment in time, and the great article I was going to share with you. The only problem was- there was.. nothing. No mosaic! STAY TUNED AND TURNT UP FOR PART 3

No one throws down harder at the techno parade than two six year olds by the Haribo truck 🍭
The 2nd day of Fall calls for hot coffees in cozy little cafés
The Final Resting Place of Madame de Pompadour
Today was the monthly "Journée Sans Voiture" (Day Without Cars), where only taxis, buses, and medical/police cars are allowed on Paris streets.
Proud Mama Moment 🥰
The sun is rising later and later, a gentle reminder that we are about to bid sweet summer mornings adieu..
Thursday September 15, 2022
I wrote this poem in 2020 after being inspired by the random people I see reading in the street.
Electric Scooter coming in hot... 🤬
King Louis XVI’s Last Minute Rescue Attempt
Up until yesterday, 96 year old Queen Elizabeth II was the longest reigning monarch alive.
I'm not quite ready to say Au Revoir to the last few delicious humid nights of late summer, but these sudden rain showers are a cool breath of fresh autumn air 🌿
Loading Comments...