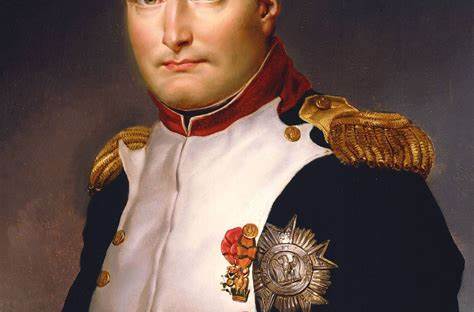 Napoleon Bonapartre or Napoleon Born2Party? History’s favorite not-so-little General had a hot and steamy sex life with his first wife Josephine (look up their raunchy love letters if you want to read 18th century smut lit.) but we can thank a certain Mademoiselle Deschamps for making a man out of the scrawny 18 year old with greasy hair and thick Italian/Corsican accent.

In November 1787, teenage Napoleon came to Paris to finish military training. He must have been lonely because one evening he left his hotel on the rue du Four-Saint-Honoré and wandered around the Palais Royale neighborhood, which was the equivalent of a bourgeois red light district at the time.

He later would write in his journal about “The First Time”. Here is my personal translation of these events set in a 21st century dialogue.

Thursday November 22, 1787 Hotel de Cherbourg, rue du Four-Saint-Honoré: So there I was, walking around kicking rocks in the Galleries of the Palais Royale when I spot a really pathetic looking hooker. She was pale and thin and barely a teenager but her awkwardness at playing an adult was kind of a turn on. I asked her how she wasn’t freezing her ass off in that crop top and was pleased to find her a little shy but easy to talk to. We started shooting the shit, talking about her hometown of Nantes and how she found herself in this line of work (“she was taken advantage of by a soldier. Then another, who took her to Paris. Then another who she lived with for 3 years but it didn’t work out because he was two timing her with an English lady) and why she didn’t do something else (“Embroidery and babysitting ain’t gonna pay my bills. Heels and hustle baby”). She suggested we go back to my digs and I played dumb, asking her what we would do. She replied “We will warm up and then play butt games”. Now I’m normally not much of a spontaneous guy, but considering my failure to successfully seduce a woman up until this point, I figured what the hell, why not. It was now or wind up a 20 year old virgin!“

Napoleon stayed at this hotel for several months and was described as shy, awkward, and a little sad. He signed his name in the register using the Italian-ized Napolione Buonaparte. According to the owner, he only left his room (3rd floor, room #9) for meals which he took at a nearby deli.

The hotel was destroyed in 1914 and the portion it was on razed to create pavillons 1&2 of the old Les Halles centralized Paris markets. Today the street is named Rue Vauvilliers and the exact placement of where Napoleon lost his V card is located in a children’s park. Napoleon didn’t leave us any further juicy details of this important life event but he did grow out of his awkwardness not long after. Only 17 years later he would declare himself Emperor of France. You can read the original diary entry transcript here. https://www.napoleon.org/…/une-rencontre-au-palais-royal/

Paris Bouquinistes, (or lack thereof) 100 years apart ..
"She keeps her Moët et Chandon
Café terraces aren't the only sanctuary where you can rest your tired feet and watch the world pass on by.
I may not be amongst my people at Lambeau tonight for Green Bay's big game against the Lions, but I'd like to think this sacred prayer and my close proximity to the higher powers at Notre Dame Cathedral in Paris might help!
Place de Grève
Le Pantalon Bar
Chestnuts roasting on a .... ?
The Real FIRST Photo of a Human?
A Brief History of Paris Public Sanitation
Paris Photography - The View from the Pont Neuf in 1840's
✨ Belle Époque Trivia ✨
Vintage postcard I picked up today at my favorite local Paris antique shop @lilasantiquites.portroyal for 50 cents.
Loading Comments...
%d bloggers like this: