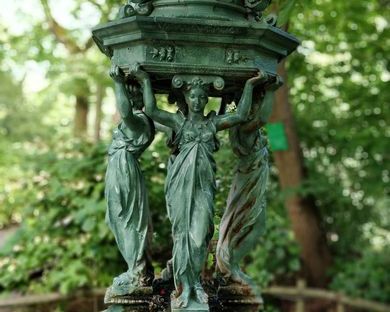 YES YOU CAN DRINK WATER FROM THE FAUCET IN PARIS.

Now that we got that out of the way… its true that Paris can take a toll on your pocket book. But that doesn’t mean you have to pay for the most important element to sustaining human life. DRINKING WATER! For over a decade, the city of Paris has fought against plastic waste by making more than 1, 200 free water distribution locations throughout the city. You can find the interactive map here. http://www.eaudeparis.fr/nc/carte-des-fontaines/

However having access to clean and free drinking water is a relatively recent development. Only about 150 years ago, water was not easy to come by until one British man made water more accessible than ever to Parisians. Have you ever noticed these emerald gems steadily delivering a stream of cold water during a flanny little stroll in Paris?

Known as the Wallace Fountains, these guys (or four buff ladies if I’m being anatomically correct) are the creation of British philanthropist Sir Richard Wallace during the 1870’s.

Paris during this time was a disaster. The Franco-Prussian war had just ended leaving Parisians to pick up the pieces and rebuild their glorious city. This wasn’t easy to do because after surviving the Prussian’s siege of Paris, much of the population was sick and starving. (So hungry that Parisians slaughtered anything they could get their hands on to eat- including domestic and zoo animals, even rats!)

To make matters worse, many aqueducts that brought water to the city were damaged during the siege, making clean water expensive and hard to obtain.

But thanks to a certain British fellow with a large heart (and even larger wallet to finance their construction) 50 of these fountains were placed around Paris to provide fresh water for anyone who wanted it.

There were a few rules when it come to building a Wallace fountain.

If you look closely at a fountain, you see four caryatids (an architectural column which takes the form of a standing female figure) each representing kindness, simplicity, charity and sobriety. (Sobriety because there were many alcoholics during this era when alcohol was cheaper and easier to find than clean drinking water. Oddly enough, in most cafes a glass of wine is cheaper than a bottle of water!)

The distance between each caryatid was calculated so horses couldn’t stick their heads inside but you could still get your hand in with a cup to fill up whatever you needed to. Two metal cups were hung at each fountain until 1952 when they were removed for hygienic reasons.

Today there are about 120 Wallace fountains throughout Paris and you can see that they are appreciated by everyone from the ultra chic with their Eco friendly BPA free glass bottles, to the homeless refilling a former bottle of wine, and to the sweaty city joggers after a long run.

So next time you see one of these historic works of art- pay homage to Sir Richard Wallace and take a drink!

No one throws down harder at the techno parade than two six year olds by the Haribo truck 🍭
The 2nd day of Fall calls for hot coffees in cozy little cafés
The Final Resting Place of Madame de Pompadour
Today was the monthly "Journée Sans Voiture" (Day Without Cars), where only taxis, buses, and medical/police cars are allowed on Paris streets.
Proud Mama Moment 🥰
The sun is rising later and later, a gentle reminder that we are about to bid sweet summer mornings adieu..
Thursday September 15, 2022
I wrote this poem in 2020 after being inspired by the random people I see reading in the street.
Electric Scooter coming in hot... 🤬
King Louis XVI’s Last Minute Rescue Attempt
Up until yesterday, 96 year old Queen Elizabeth II was the longest reigning monarch alive.
I'm not quite ready to say Au Revoir to the last few delicious humid nights of late summer, but these sudden rain showers are a cool breath of fresh autumn air 🌿
Loading Comments...
%d bloggers like this: